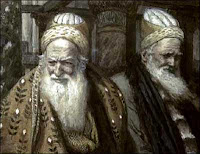 (1) Why do the heathen rage, and the people imagine a vain thing?
(2) The kings of the earth set themselves, and the rulers take counsel together, against the LORD, and against his anointed, saying,
(3) Let us break their bands asunder, and cast away their cords from us.

The rejectors are categorized into three groups particularly the nations, the rulers, and the individual. The primary characteristic of those who willfully reject the mercies and kindness of God is that of “rage” meaning violent commotion or agitation (according to Barnes). Unsaved people resort to anger as an expression of their rejection. The Psalm looks ahead to the time when the Lord Jesus arrives for the first time to be the Savior of the world. From the time He came to earth the world's rulers were already against Him. His death on the cross can be seen as a combination of rulers’ rejection both political and religious namely Herod Antipas, and Pontius Pilate, and even the High Priest Caiaphas and the Sanhedrin member Annas. The Lord Jesus is no stranger to rejection.

Besides “rage,” another characteristic of rejection is pragmatic large numbers. It is amazing how many people ascribe greatness simply on the basis of numbers. A large crowd in a packed football stadium can be very intimidating. When the cameras pan through the crowd, almost immediately we are disposed to say “Wow!” in amazement of the size of the crowd. But, at the same token, when the same crowd is viewed from on high, that is from a blimp or a “bird’s eye view” the crowd doesn’t look like anything big at all. How truly small all of mankind is in the sight of an almighty God. True greatness resides in the Lord God.

And what is their desire? Basically, they are rejecting God’s authority for their own autonomous authority. “Let us break their bands asunder, and cast away their cords from us” they say. This is perhaps the most interesting characteristic of the unsaved. The reason people reject Christ is because they do not want to come under the authority of the Lord Jesus Christ. Atheism and Humanism are simply excuses for not coming under God’s authority. The Lord Jesus said "Come unto me, all ye that labour and are heavy laden, and I will give you rest take my yoke upon you...for my yoke is easy, and my burden is light" (Matt. 11:29). And what does the Bible say about God’s commandments? 1 John 5:3 says: “For this is the love of God, that we keep His commandments: and his commandments are not grievous.” God's authority is just, right, loving and easy.

Dear friend, if you have not placed your faith in the Lord Jesus Christ alone, if you have not repented of sin and self that you may receive forgiveness of sins and eternal life, then know that you are part of that crowd which rejects Christ’s gracious offer of mercy. Don’t be part of that crowd. Don’t allow anger, rebellion and desire for control hinder your soul from receiving Christ as Savior. Today, before it is eternally too late, trust in Christ alone for Salvation.
at August 20, 2009