He had power over the angel... 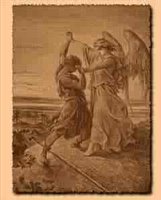 "And Jacob was left alone; and there wrestled a man with him until the breaking of day. And when he saw that he touched the hallow of his tigh; and the hollow of Jacob's thigh was out of joint, as he wrestled with him." (Gen. 32:24-25)

I have heard many sermons on wrestling with God in prayer. In this passage Jacob was wrestling a man. We know that this was no ordinary man, because in Hosea 12:3-4 this passage described Jacob as having 'power over the angel.' We also know this man to be God, since Jacob names the place "Penial" (translator's marginal notes say: The Face of God). Therefore we know the Jacob was really wrestling God. Ultimately, and it goes without saying, God won. However the persistance that Jacob had is exemplary. We can apply this passage in the area of prayer. We need to have a time where we seek God's face and hold on to him, in prayer, begging Him for His blessings, much like Jacob did. Persistant prayer is prevailing prayer. So often we do the work we expect God to answer our prayers on the spot, when God wants us to give more of ourselves to Him before He answers.
at January 31, 2006

How do you wrestle with God in prayer? Is it by continuing day after day to bring Him our petition? Or is it by repeating our request to Him over and over again for hours on end? This is something I have often considered and never really been able to answer. What do you think?

I can think of Bible examples of people who 'persistantly' prayed: Hannah, Daniel, the house of Mary in Acts 12. I think, that a persistance is a combination of quality time as well as quantity, and not to mention fasting. I also think that when major decisions need to be made that much prayer is needed, and that could also be a time of 'wrestling with God in prayer.'
WAIT A MINUTE - you know how to actually wrestle (at least more so than I) maybe you can share some insights or some thoughts on this topic.