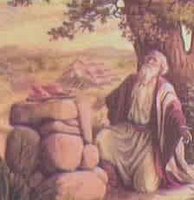 "What shall we say then that Abraham our father, as pertaining to the flesh, hath found? For if Abraham were justified by works, he hath whereof to glory; but not before God. For what saith the scripture? Abraham believed God, and it was counted unto him for righteousness."

When I think of Abraham I think of a man of faith. He was called of God out of his homeland and he obeyed, even when he had no clue where he was going. When God wanted him to sacrifice Isaac, he obeyed. In essence he is a good man. And yet the Bible teaches us that he was 'justified' by faith (see 4:5; 7-10). The Bible says: 'But to him that worketh not, but believeth on Him that justifieth the ungodly, his faith is counted for righteousness' (verse 5). Abraham did not 'work' to gain Salvation, neither could any man work to gain Salvation. Unless God gives it to us, there is no way for any man to gain Salvation. This lines up with what the Bible teaches in Ephesians 2:8-9, and Titus 3:5. I came from a religion that taught basically works-Salvation type of a belief. I think that if people could be saved on their own merits that they would never see the need to depend on God. There would be boasting, and man would be lifted up in pride. Salvation is not found in the 'sacaraments' or 'church membership' or any other good works, but rather it is a faith on the person and work of the Lord Jesus Christ. When a person trusts the Lord Jesus, God looks upon him and 'positionally' He sees the righteousness of Jesus and declares us to be righteous. Justification is a wonderful Bible truth that we need to take to a lost and dying world trying to gain God's favor by works.
at February 01, 2006