From Bethel to Sodom (Lot lost a lot) 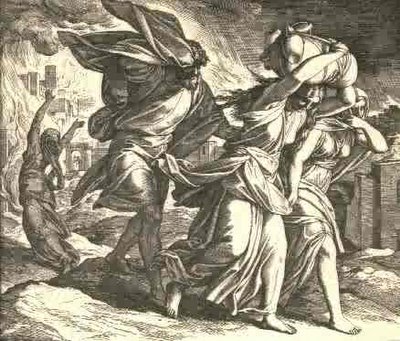 "And turning the cities of Sodom and Gomorrha into ashes condemned them with an overthrow, making them an ensample unto those that after should live ungodly: And delivered just Lot, vexed with the filthy conversation of the wicked: (For that righteous man dwelling among them, in seeing and hearing, vexed his righteous soul from day to day with their unlawful deeds;)" (2 Peter 1:8).
We know Lot to be the son of Haran who accompanied Terah from Ur to Haran (Gen. 11:31). Lot having lost his father, was taken care of by Abram (who also lost his dad) - seemed like a perfect combination - Uncle and nephew taking care of each other. Lot was with Abram when he went to Egypt and back to Bethel. Lot choose to move closer to Sodom, having examine to the best of his abilities which portion of the land was well watered and suitable. His attitude of carpe diem blinded him to his spiritual need. Although for a period of time he was enjoying this community of sodomites - it was only for a season.
1. Lot lost his separation - "And said, I pray you, brethren, do not so wickedly." (Gen. 19:7) - It was as if there were some camaraderie with the sodomites.
2. Lot lost his morals - "Behold now, I have two daughters which have not known man;..." (v.8)
3. Lot lost his possessions - "Lot hast thou any here besides?...For we will destroy this place..." (vs. 12-13)
4. Lot lost his influence - His daughters and sons-in law did not listen to him (see v.14).
5. Lot lost his children - They were burned up in the destruction of Sodom because they did not listen to their father (v.14 and v.24)
6. Lot lost his wife - "But his wife looked back from behind him, and she became a pillar of salt." (v. 26)
7. Lot lost his sobriety - He became a drunkard (v.32)
8. Lot lost his purity - with the incestous relationship with his daughters (vs. 32-38).
Sin is ugly, and it affects everyone around it.
at January 18, 2006